As a present for Michis birthday, we spent a relax weekend in Qingdao. Relax meaning nice hotel, nice food, limited sightseeing.  The weekend started in a rush, because it took me 3h to drive (be driven) 30km from the western outskirts of Shanghai to People Square. Actually, I had planned to go home and go to the airport from there, but after the driver managed to miss the tunnel entrance, I decided to get out and meet Michi in the Subway.

After the initial rush, things turned to the better. We arrived late night at our hotel, the Shangri La (fake taxi drivers at the airport were very pushy, even running after us). Hotel is nice, our room in the old wing also. We took a late night Tsingtao at the Lobby Bar before heading to bed.

Saturday morning, we slept in and got up just in time to grab some breakfast (buffet was plentiful and good). The weather was cloudy, so we could only imagine the Laoshan Mountains. We decided on a stroll along the sea. Starting from the Olympic Sailing Center we walked all the way to the pavilion on Zhang Bridge (roughly 9km). From the Sailing Center at Fushan Bay, watched the algae pickers in Taiping Bay, walked along Huiquan Bay into Qingdao Bay and to Huilan Pavilion. We enjoyed watching regular people walking out on the low tide rocks, picking algae or collecting clams, which looked like small oysters, by cracking them open with a small hammer and collecting the insides. Also great to watch were the many marriage couples that were out on the rocks for photo shoots. 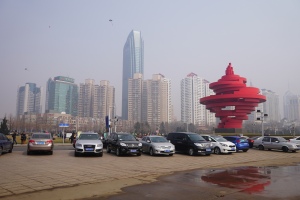 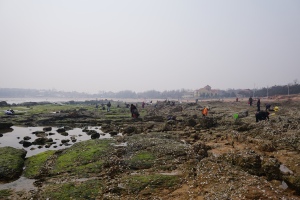 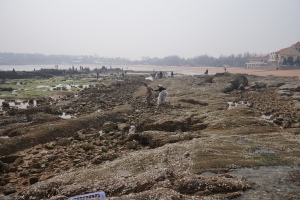 The pavilion was crowded and not so spectacular. So we turned to explore the German Quarter. First we made a stop at the Telecommunications Museum. The Germans had built a small Telegraph system shortly after the setup of the concession in 1897. We roamed the streets of the German Quarter, seeing plenty typical German houses, looking also at the Governers House and the German Prison. Surprisingly, we did not find any good place to have a coffee or a snack. Our plan for a late afternoon visit to the bear museum with some was thwarted by its early closing times at 16:30. So we took a taxi back to the hotel, relaxed and enjoyed some great chinese food in the Shang Palace restaurant. A few lobby bar Tsingdaos later, we called it a night. 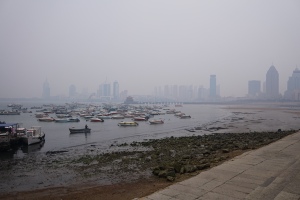 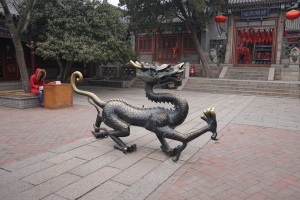 Sunday morning, we again had a late breakfast. Afterwards, we wanted to try the pool. However, we had to find out that the whirlpool at the pool had pool temperature; which is ice cold to just sit in. The pool supervisor gave us a speech about some chinese regulations that requires pools to be the same temperature. All we could do was to take a short dip in the (super hot) pools in the changing rooms; seperately.

After some more relaxing, we checked out and took a taxi to the beer museum.  We booked the free-flow beer tour (just 20RMB more for 2h open tap and a german sausage, which turned out to be quite good) and an english tourguide. For 60RMB, we got our private tourguide. The brewery has two parts, an old part showing the 1903 brewery, and a new part that is producing beer. We got some bits of insight, e.g. that Tsingtao is the latin spelling of Qingdao (duh!) and that the Tsingtao logo shows the Huilan Pavilion (prior to 1948, it showed the lighthouse on the Xiaoqing Isle) (ah!). We ended the tour with some Tsingtao and German snacks. Michi even acquired some mustard. 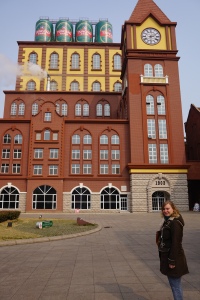 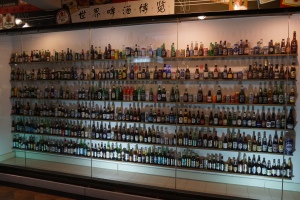 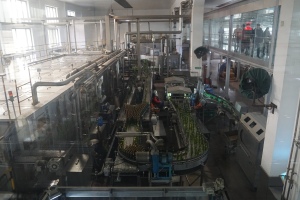 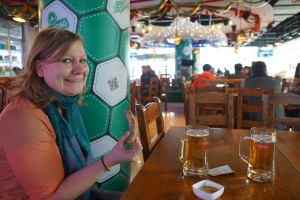 As we had some time, we walked down the world famous shopping street – not quite sure, why. Then, taxi to the airport and of back to the working world. 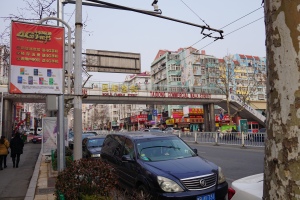