National Day holidays and annual leave are coming to an end. It’s time to remember.

Our first trip led us to Chengdu for a trek into the Minya Konka mountain range, south west of Chengdu. I had been in Germany the week before, so I was able to travel in style: Arrive in Shanghai on 27.09., packing and leaving for Chengdu with Michi on the 28th. Our guide picked us up from the airport and dropped us of at our hotel (“Traffic Hotel”… some advanced marketing was at play to come up with that name). In the evening, we did some last minute shopping and explored the old streets of Wuhouci (old temple surrounded by old-style streets with a lot of bars, restaurants and live music, sometimes two singers in the same bar (singing different music…)).

Our adventure began on the 29th with the drive to our starting point. The first 4h of the 9h drive took us through the Panda Bear habitats to Kanding (fairly small mountain town with an old style communist flair), where we bought some local tibetan bread (very spicy). Than, we headed of into the mountains. We drove another ~3h over smaller roads (passing the bloody river coming out of the mountains), and than turned onto gravel mountain treks. The drive was, let’s call it “adventurous”, also seemed to be completely normal for the local people. In the late afternoon, we arrived in the Gyazela Valley where we made camp in a tibetan guest house. Food (Yak) was superb and the people very friendly.

Next day (30th), we took a sedan offroad – at least what we would consider to be a road or even a trail, to our starting point at ~3.500m (I have no idea, why. Also I have no idea how the car survived this trip). While we carried most of our stuff (at least in the beginning), we had a horseman with two mules who would carry our food water. Sun was shining (we both got heavy sunburn despite 50+ sunscreen). The landscape was incredibly beautiful: Green meadows, shady pinewood forests, a cristal clear, deep blue river and snow capped mountains. We climbed slowly for about 6h to reach our camp site at 3600m. Surely, we got the first headaches due to the high and exercise, which would continue until the end. The night was beautiful (except that the first of the sleeping mats, we borrowed from our guide, burst). Stars were incredibly bright and we had a full view of the milky way.

The next morning we continued slowly upward to our next camp at 4.200m; the winter pasture. The trek was short (which helped us to acclimatize) and led us along the stream past the Yak herds. The Tibetans welcomed us and gave us milk tea. Over time, the camp became quite crowded with more and more groups of Chinese hikers streaming in. As the clouds pushed up through the valley, it became very cold early in the evening, so we went to sleep early to be prepared for the big ascent the next day.

On the 2.10. the weather was beautiful, again. Today was the big day, trekking over the 4.850m pass. We decided that Michi would take a horse up. So she headed out, while I followed… increasingly slowly. The landscape was, again, beyond believe: The green meadows and streams of the winter pasture below us, mountains over 6.000m with their glaciers above us. At the second step at around 4.700m the air became quite thin. As a theoretical high altitude mountaineer, I tuned my breathing to one in-out per step (seriously, I highly recommend better acclimatization for this altitude). After 2,5h I reached the pass and we continued downward. Again, the landscape became very picturesque and we made good way downward. One severe problem was that Chinese people do not seem to need water. Hence, our guide only provided us with 2l for the day instead of 4l that we had asked (Chinese always seem to know better what you need, than yourself). As he had trouble finding the intended camp site, we camped by the rever and enjoyed the view on the glaciers.

October 3 was nice but uneventful. We continued down the Moxi Valley. During the day, we met a lot of Chinese hikers (loud, very dirty and very competitive). The air was much thicker at 3.800m.

Early afternoon on the 4th, we reached the Gongga Gompa Monestary. A quite magical place at the foot of Minya Konka, which is the starting point for the trek to the Minya Konka base camp. We did not see Minya Konka because of thick fog. We did not stay at the monestary (never let your chinese guide do the tour planning for you; because they always seem to know better what you want). After some disputes, we decided to descent to Jiebeishi, a small “town” of a few hundred people. Our guide put us into a hostel (?), a room similar to a storage unit. The night turned out to become quite bizarre: Not only did people repeatedly scan our room with flashlights, one person opened the window and tried to climb in, others broke the lock from the outside. We spent the entire night awake, chasing of these strange people (maybe someone made a joke and told them there was a golden cookie in our room…). At least one guy got really scared by me jumping up and screaming at him that he ran/stumbled off across the yard.

Anyway, next day I told our guide that we would end the trip (it was the last day anyway) and go back to Chengdu. Adventure was not over. First, we took a car to “the lake”. It took three guys and a screwdriver (used as a crowbar) to close the car’s sliding door (not without breaking off the entire door, first). Another offroad ride, including some river crossings, followed in a minivan. After that, we took horses (again, through the most beautiful landscape) to our exit point at Caoke. There we filled up on grilled Yak and waited for our driver. The guy finally arrived around 3pm. With the traffic on the National Days, it took us until midnight to get back to Chengdu. The driver almost fell asleep. Since Chinese seem to be unable to admit weakness, he would not stop to rest. Quite a scary ride. We were very happy to fall into our beds.

Definitely a trip to remember. Biggest learning: Do all the planning yourself and use guides only to help to communicate with the locals.

Blood coming down the mountain (stones are red from a fungus)

Starting picture with our guide

The stars in the sky and fog crawling into the valley

Camp at the winter pasture

Our horseman following me up the pass 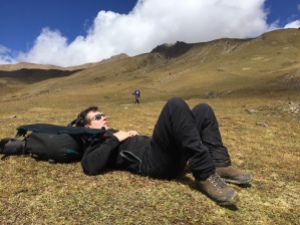 After the pass, the landscape invites me to rest

Scary: They put a dead wolf outside our room window to create an atmosphere for the crazy night of chinese zombies 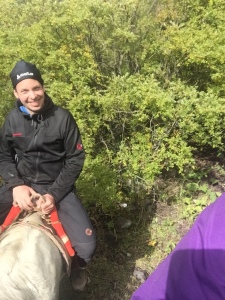 “The lake” and the ride back 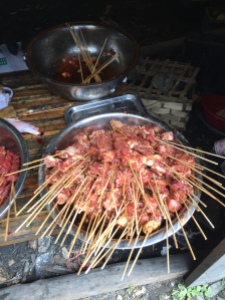 Tibetan BBQ at our final destination